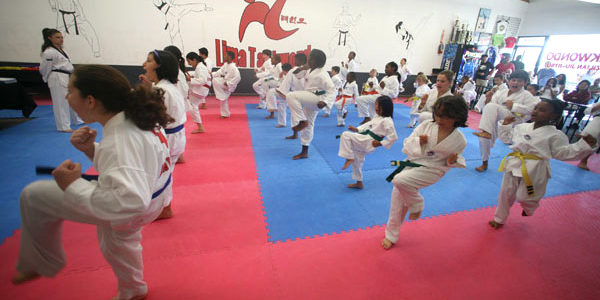 A few weeks ago I took LB’s youngest off to her first Tae Kwon Do class – she is a dab had at Japanese Jujitsu and the thought of actually kicking people in the head appealed to her (as it should). So as the resident expert on such things I did a bit of research and found a school nearby. Wandering into the class was eerily familiar and it could be an 11 year old me wandering into a community hall in Camberwell more years ago than I would care to remember. As with all of these things the class was split into various groups – their were dozens of munchkins wandering around aimlessly, young teens who knew a bit but were too cool for school and a few old hands making certain everything didn’t degenerate into chaos. It was also the old sausage factory I remembered it to be.

As the class started something struck me – in the intervening decades TKD had not changed at all from the art I had left decades ago. This might not seem to be a big thing, after all there is a limit to the movements the human body can perform. You would expect that once these basic movement patterns had been perfected then there would be no need to change anything. However, in the intervening years the martial arts themselves have changed dramatically. We have seen the rise of Muay Thai and the incorporation of their wonderful thigh kicks, elbows and knees, Grappling arts have made their presence felt and people finally realised that Western boxers had the best hands around. All of this has been incorporated into the arena of UFC where remarkably durable young men and women bring all these skills to bear. Added to this we have seen the rise of reality based self defence where ordinary folks are taught that they can survive a violent encounter if they simply get their psychology right (sounds familiar). Even during my time with TKD it changed from a martial art to a sport which is the reason I left.

In my view the physical aspects of a martial art have only one aim and that is to drop someone on their arse with the least amount of fuss as possible. Everything else is secondary. TKD has lost this central tenet and submerged their students in an ocean of useless techniques and false bravado. A black belt grading for nay martial art involves the mastery of dozens of forms and hundreds of techniques. When I first started to work in pubs I found I used probably no more than three techniques and none were derived from what I have learnt during a decade of TKD pyjama wearing.

Traders are fortunate in they also have a single clearly definable aim – to make money – all else is secondary. However, we too have seen the world change around us. Back in the day the only way you could get live stock prices was to stand in the public viewing gallery of the not the ASX but one of the regional exchanges. The amalgamation of city exchanges into the unified ASX is a recent invention. Newspapers then as now were always out of date and there was no internet to pick up the slack. We have seen the introduction of new platforms and instruments – when I first started trading there was one instrument available locally – equities. Derivatives came along a few years later.

Interestingly, this central tenet is lost upon many in much the same way TKD has lost its way. Traders now seem so preoccupied with all the periphery of trading that they lose sight of what trading actually is. Trading involves forming a view, placing a trade and managing the consequences of that trade. It is not about adding more noise to an already crowded conversation. Consider the chart below of the AUD/USD.

I am currently short this pair and the decision to go short was based upon a single straight line. To my way of thinking the shortest route between me and the money was literally a straight line. Adding additional analysis to a chart removes you from the money. It may aid either in your construction of a narrative or ease the psychological pain of uncertainty but does it add to the quest for money.

The question all traders should start the day with is will this add to my potential to make money or is it merely a distraction designed to  ease a fear  that is present in the trading process. Or worse still, is it an excuse to completely avoid trading altogether much like supposed Chi masters who say they couldn’t possibly enter any form of competition because their techniques are too deadly.