Take Me Out To The Ball Park 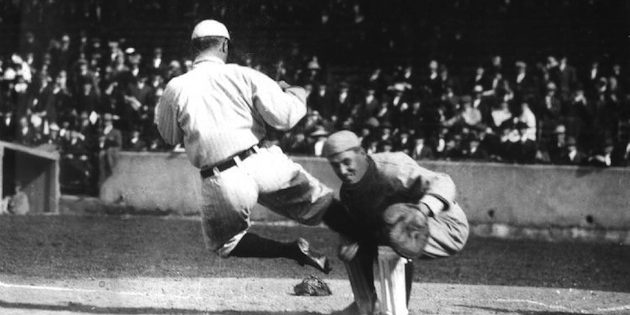 The Americans have at the centre of their sporting culture three of the most boring games ever invented. A game of gridiron can last some three hours but only around 12 minutes of that is actual playing time, the rest is commercials and replays of the paltry 12 minutes of playing time. Basketball consists of very tall blokes running backwards and forwards making certain that everybody gets a turn and when they do decide to get a little physical is looks like a rendition of Swan Lake given by the worlds tallest ballerina’s. Baseball is on par with cricket as the worlds best sporting anaesthetic but you do get to sing about rooting a particular team which make an  immature fools like me giggle…

However, this lack of action in national pastimes has lead to an obsession with statistics, if only to pass the time between something actually happening. This obsession has reached its apex in the game of baseball where statistics drives the entire game, from player recruitment to overall strategy. A good primer on this is Moneyball by Michael Lewis. In baseball skill as a batter is determined by your batting average – literally the number of times the batter hits the ball. The table below shows the top 10 batters of all time. You will note that the doyen of American baseball, Babe Ruth comes in tied for 9th place. The number one position is held by Ty Cobb who as well as being a talented players was both an arsehole of legendary proportion and a major shareholder in Coca Cola.

The interesting thing about this table is how hard it is to be consistently successful – this is natural since every element of an opposition is geared towards reducing your edge as much as possible. Think about it this way, every time Cobb picked up a bat he was only likely to make successful contact with the ball 36.6% of the time. Our expectation is that the elite will be right/successful most of the time yet Cobb was only successful 36.6% of the time but he is regarded as the best of all time. You will note though that I have used a qualifier in my description of what makes up a batting average and this qualifier is important. I use the word effective when I talk about making contact with the ball, the average doesn’t include events such as walks, sacrifices, the number of times a batter is hit by the pitcher or when they are interfered with by the catcher. Success is measured by clean hard contact with the ball and to be very good you dont need to do this very often.
What prompted this piece was a conversation with a friend the other day and we were talking about win loss ratios and his sat at 50%, which is pretty good. Expectancy is still negative but it is trending in the right direction. In trading your success is not measured by the number of times you are right – that is little more than a balm for your ego not a boost to your bank balance. Consider the table below where I have mapped the number of the size of the average R multiple per trade and used that figure to take a stab at the number of times you need to be right in order to be profitable. The important thing here is that as your average R value grows the percentage you need to be right in order to be consistently profitable drops. This is why it is so important to ride those big winners when they do occur and not let yourself lapse into ego defensiveness and take an early profit just because it makes you feel good.

It is obvious that in trading there is no fundamental nexus between being right and making money and this is a difficult concept for traders of all levels of experience to understand. What matters is how effective you are at applying your particular edge to generate over time a reasonable R multiple. The important feature here is the notion of over time since the calculation of R is always an average. The longer you are in the game the more this average value should drift up because you are gaining experience and ironing out the kinks not only in the system but also in your own psychology. When you look at sporting stats such as those above you are seeing the end result of a two sided competition, each side looking to nullify the other one. The same thing does actually happen in trading but it is much more nuanced than most think. Only peanuts think the market is out to get them but you do have an opponent who works to strip away your edge. The opponent is yourself. Over decades I have seen traders fail not because of theirt system, their broker, the sort of instrument they trade or even their computer. They fail because of the people they are.

Categories: Economy, Get Your Shit Together, History and Science, Trading PsychologyBy Chris TateMay 7, 2016

The Effect of Testosterone on Economic Risk-Taking
July 21, 2021