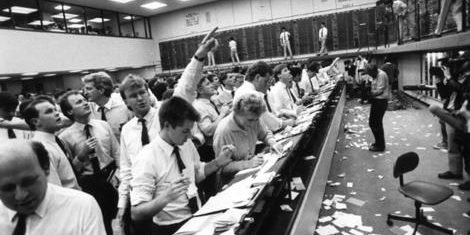 So I am sitting in the pointy end of an old Ansett bus waiting to be ferried back to Melbourne. A few hours earlier I had been wandering around the offices of a very large and well known Sydney based broker. They had flown me up to talk about setting up a derivatives trading desk. Apparently, they had found out the hard way that getting a former shoe salesman to to teach clients about derivatives was a bad idea. Who would have though that?

So I did the rounds of the broker, meeting all the relevant peanuts and being shown the size of their boardroom table. This was supposed to be impressive; it was one of those dick things. The smaller the tackle the larger the boardroom table. After the tour where one is supposed to go oh and ah at everything because that impresses Sydneysiders who don’t think you have ever seen a bridge before. We sat down at said supposedly impressive boardroom table to talk about the job. I am always bored by preamble so was anxious to get to the point and the easiest way I found to get people to the point is simply to ask – how much? All broking jobs are the same, the surroundings are the same and the people are the all same. It is merely a matter of how much you are paid to put up with the shit that the industry entails. Anyway head peanut leans forward in a conspiratorial manner and and says that they are willing to pay you $25,000 a year. Without thinking, which is the way I do most of my talking I replied so what am I going to do for the remaining four and half days of the week? To my surprise this brought the interview to a screeching halt. It is surprising to me peoples perceptions of how much is a lot of money.

The next day I wander back into my office – broking is a same shit different day sort of business. The day begins with a morning meeting where analysts tell us all what stocks they think are going to do well. An analysts view on how well a company will do is based upon the immensely important consideration of did the company pay for lunch and was it a good lunch at somewhere decent such as the Flower Drum.

My view of the morning meeting is that if you do the opposite of what analysts say your clients will make money.  After the morning meeting I wander across the road to the little greasy spoon which makes the best toasted cheese sandwich in the world. Back in the office the formal trading day begins with the opening of the market – this used to be vaguely interesting but the equities trading floor is gradually being phased out and replaced by electronic trading. I would still occasionally wander back down to the floor just for shits and giggles. It was always interesting people watching the desperate’s in the public gallery who would scribble down prices in strange little notebooks and mutter to themselves. Interestingly, as the technology changed this flotsam that hung around exchanges simply migrated somewhere else. They became a feature of the new market display area where they would argue over access to the display terminals with all the ferocity of drag queens who spotted somewhere wearing the exact same outfit as them.

The morning drags on – routine is part of the broking life, as is dealing with total idiots. Money or the promise of money seems to attract them in droves. I get a phone call from a peanut who wants to list his house – I kid you not. Someone how this idiot had managed to get through to me and he explained in long boring detail as to why it was a brilliant idea for him to list his house in St Albans on the ASX. If you not know where St Albans is look it up – you find it filed under places I would prefer to go to jail rather than live in.

Before the market went fully electronic it used to have a lunch break because lunch is something gentleman did. So I wander off down to the Burke Street Mall to grab a Red Rooster $2 meal deal. Its a glamour life in finance but someone has to do it. On the way back I check into David Jones – at this time in my life I had a bit of a tie fetish and I had a young girl who bought me clothes on spec.I would wander in and try things on and give the thumbs to anything I liked.

Many years later I ran into this girl at my gym and she gleefully informed me that she had named her first son after me. This caused me to drop the weight I was holding on the end of my gentleman’s extension…..

That however is a different aspect to  life in the late 1980’s.

Categories: Brokers/Fund Managers, Get Your Shit Together, History and ScienceBy Chris TateFebruary 26, 20164 Comments