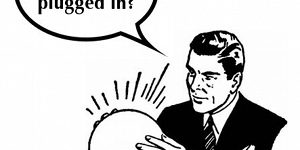 This is a chart of investor sentiment as produced by the American Association of Individual Investors. Each week the association polls its members with the question where do you feel the stockmarket will be in the next six months. The results are tallied to give a percentage bullish, bearish or undecided. These sorts of metrics are given great status in certain parts of the investing community and I have to admit when I first entered this business back when we all rode dinosaurs and wrote on slates I spent many and evening looking at sentiment indicators trying to work out exactly what they actually did, if anything.

A simple maxim when looking at  survey data is to look at the population that is generating the results you are looking at. In this instance individual investors are being asked their perception of the market over a given time period. It is important to note that investors are being ask to rate what is effectively and emotional response to the market – do they feel bullish, bearish or disinterested. They are not being asked a quantitative question. A quantitative question would something simple such as how tall are you? A sentiment or emotional question would be how tall do you feel? Such questions can be considered context questions and are such are dependant upon circumstance. For example I stand about 1.93 metres tall and yesterday I attended a 10 year birthday party so my perception of my height is that I am  giant. However, if I was playing in the NBA where the average height is over 2 metres then I would be less cocky about my height. To put it into the context of this survey around 10 year olds I am bullish about my height, around NBA players not so much. My height has not changed, what has changed is the context of my height. The same is true for these investors when polled, there is no context given to the circumstances that generated their response. For example if you have just come off a winning trade then you are apt to be bullish about the future. If you have just come off a losing trade then your confidence would be shaken and you might be more circumspect about the future.

However, there is a further point to be considered and that is the somewhat blunt one of who cares what average investors think about anything? The narrative fallacies of individuals is of no concern to any other market participants. But more importantly it is of absolutely no concern to the market. There is no way to communicate either the perceptions of individuals or the results of their collective perceptions to the market and given that average investors are consistently wrong in their perceptions it doesn’t seem to matter what they think.

This does raise the question of what about the polling of professional investors  and professionals are often surveyed about their perceptions of the market and people attempt to divine something from this sentiment. However, this approach also runs into problems. Consider the table below which was drawn from the Investor Intelligence Database. The table operates on a simple maxim. When fund managers are bullish they move out of cash and into stocks. When they are bearish they do the reverse. This cash/asset ratio was measured and then compared to the Dow to see whether the move was prescient in any way. Unfortunately, it wasn’t. The professionals managed to be correct in their interpretation of sentiment on only 7 out of 33 occurrences. You would have been better off tossing a dart.

At the heart of much of this surveying is an attempt to generate some sort of predictive modelling about markets. I note that the current fad is to look at social media tools such as Twitter to see if they tell us anything about the underlying emotional intensity of the market. Whilst I sympathise with the need for the average investor to try and predict where the market is going for the time being trading remains a reactive profession that is best served by simply looking at price, making a bet and managing the trade. Despite what many would have you believe it is not rock science.