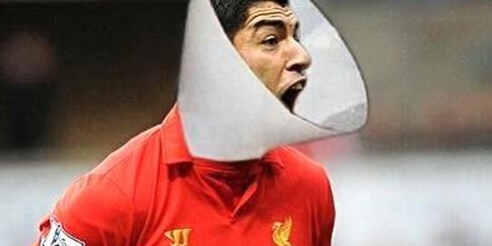 Some back-of-the-envelope maths regarding Luis Suarez: according to Wikipedia, he has played in 363 club league, cup and friendly matches since breaking through into the Nacional senior team in the 2005/06 season. He’s also played 78 times for the Uruguay national team.

He has bitten three opposition players in the time it took him to play those 441 senior matches – PSV’s Otman Bakkal in November 2010, Chelsea’s Branislav Ivanović in April 2013, and now Italy’s Giorgio Chiellini in the World Cup game on 24 June. This raises a crucial question: how much risk is a football player taking if Luis Suarez is on the opposition team? You’ve got to know the risks when you get involved in a contact sport, after all.

Let’s crunch some numbers. Suarez’s bite rate of three in 441 means we can expect him to take a bite out of someone every 147 matches, but if we assume that there are 14 players at risk of being bitten (that’s 11 starting players and assuming three substitutes come on) that means Suarez has bitten three players out of the 6,160 who have lined up against him in his professional career.

We can therefore conclude that Luis Suarez has roughly a one in 2,000 chance of biting any individual opposition player. For comparison, the following things are less likely than being bitten by Luis Suarez: