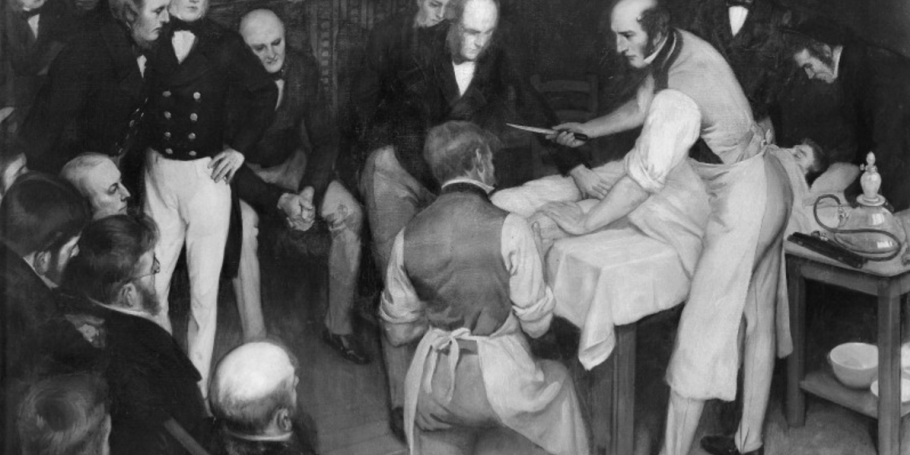 Whilst browsing I came across this piece – it looks at the early resistance to the use of anaesthetics. We take for granted that when we have a surgical procedure done that we will be asleep for the duration. However,this is a relatively new phenomena, previous generations had to tolerate surgery as it was fully awake or drugged insensate by whatever primitive methods they had such as alcohol or opium preparations such as laudanum.

What is intriguing about this piece is the profound resistance to change within the medical community despite the clear benefits that anaesthesia brought to not only the patient but also the surgical team. One can only wonder what it was like to be a participant in an activity of cutting someone open whilst they were awake. It is no small wonder that surgeons in Victorian times could amputate a leg in around 30 seconds.

It is interesting that whilst some arguments against the use of anaesthesia might have been relevant such as potential complications.This was a very new procedure and it still had many bugs to be worked out. This is a natural and acceptable caution. However, some of the objections were based upon appeals to the bible – suffering is good because it says so  in the bible. Others were simple professional jealousy.

What this is instructive of is the profoundly difficult nature of change. It could be argued that the resistance to change in this example was a profession wide resistance, in part based upon sound reasoning and in part based upon idiotic appeals to magical thinking. However, decisions not to change are individual decisions. The desire not to take up this new technique which had obvious advantages was done at the level of the individual. Change is a function of the individual and individual are remarkably resistant to change, even in the face of evidence. This is particularly true in light of acknowledging our own failings – we struggle to see ourselves clearly and even when we do it is difficult to change on the basis of what we have observed.