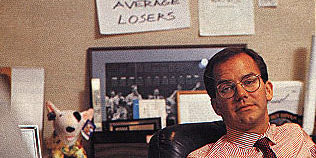 1. Markets have consistently experienced “100-year events” every five years. While I spend a significant amount of my time on analytics and collecting fundamental information, at the end of the day, I am a slave to the tape (and proud of it).

2. Younger generation are hampered by the need to understand (and rationalize) why something should go up or down. By the time that it becomes self-evident, the move is over.

4. There are many more deep intellectuals in the business today. That, plus the explosion of information on the Internet, creates an illusion that there is an explanation for everything. Hence, the thinking goes, your primary task is to find that explanation.

As a result of this poor approach, technical analysis is at the bottom of the study list for many of the younger generation, particularly since the skill often requires them to close their eyes and trust price action. The pain of gain is just too overwhelming to bear.

5. There is no training — classroom or otherwise — that can prepare for trading the last third of a move, whether it’s the end of a bull market or the end of a bear market. There’s typically no logic to it; irrationality reigns supreme, and no class can teach what to do during that brief, volatile reign. The only way to learn how to trade during that last, exquisite third of a move is to do it, or, more precisely, live it.

6. Fundamentals might be good for the first third or first 50 or 60 percent of a move, but the last third of a great bull market is typically a blow-off, whereas the mania runs wild and prices go parabolic.

7. That cotton trade was almost the deal breaker for me. It was at that point that I said, ‘Mr. Stupid, why risk everything on one trade? Why not make your life a pursuit of happiness rather than pain?’

8. If I have positions going against me, I get right out; if they are going for me, I keep them… Risk control is the most important thing in trading. If you have a losing position that is making you uncomfortable, the solution is very simple: Get out, because you can always get back in.

10. The concept of paying one-hundred-and-something times earnings for any company for me is just anathema. Having said that, at the end of the day, your job is to buy what goes up and to sell what goes down so really who gives a damn about PE’s?

11. The normal progression of most traders that I’ve seen is that the older they get something happens. Sometimes they get more successful and therefore they take less risk. That’s something that as a company we literally sit and work with. That’s certainly something that I’ve had to come to grips with in particular over the past 12 to 18 months. You have to actively manage against your natural tendency to become more conservative. You do that because all of a sudden you become successful and don’t want to lose what you have and/or in my case you get married and have children and naturally, consciously or subconsciously, you become more conservative.

13. I believe the very best money is made at the market turns. Everyone says you get killed trying to pick tops and bottoms and you make all your money by playing the trend in the middle. Well for twelve years I have been missing the meat in the middle but I have made a lot of money at tops and bottoms.