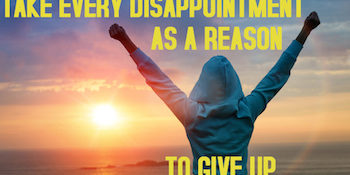 We are only a few hours away from the usual rush of New Year – New Me bullshit that seems to percolate to the surface at this time of the year. This may seem like a somewhat grumpy thing to say during the festive season. Surely the beginning of a New Year is something to be  both celebrated and to be used as a watershed moment whereby new beginnings can occur. Unfortunately, after years of watching people make numerous drunken pronouncement as to what they are going to do and now having the luxury of seeing them spew them all over the  internet I can safely say that it takes no study at all to realise that most of these pronouncements are little more than the rantings of an an over lubricated imagination.

Most of these new goals are simply broad generalisations such as get fit, lose weight, make more money etc etc. These are little more than wishes since there is nothing concrete to them, in effect they have no process attached to them. There is no statement about how any of these wishes are going to be fulfilled and if there is no process there is by definition no data to track your progress. As I used to tell my students without data you are just an arsehole with an opinion.

There is nothing wrong with the setting of aims – I have just always found it odd that you need to do it at the same time as everyone else and therefore predictably get the same result as everyone else. The key to moving towards any aim is simply to decide on the process. Once you  have decided on the process it is easy to begin to work out what gives you the biggest bang for your buck in terms of return. Naturally from this springs an idea of what gets in the way of your progress and you can begin to do more of what works and less of what doesn’t work. Like  most simple collection of rules it doesn’t seem that hard but something gets in the way and that something is invariably the individual.

Lets take the example of trading. Imagine the aim for the coming year is to develop a profitable trading system. The first step is to define what profitable actually means. Does it mean that you do better than breakeven and if so by how much? Will $1 beyond breakeven be sufficient of does it need to be $1million beyond breakeven. The actual setting of a goal is harder than it actually looks because even if it is relatively simple goal you still have to flesh the goal out. This is why peoples New Years resolutions are broad silly notions – they lack detail about what the aim might be and they lack the process of how to achieve that aim.

Assume we have fleshed out what a profitable trading system means we now need to delve into the process aspect of what road we take. Designing a trading system is a difficult thing – it is complex and time consuming. As an example I was reading in the recent YTE which contains an interview with Nick Radge who does good work. Nick stated that in the early 1990’s he spent two hours a day, seven days a week for 18 months researching a strategy before placing a single trade. This is the process and it is difficult and time consuming and this is why people drift away from their newly stated goals. I think at a subconscious level they see how much is involved and simply come up with some sort of excuse as to why it can the done.

However, it is only by engaging in the process that you can move onto the most important phase which is doing more of what works, less of what doesn’t work and simply getting out of your own way.

30 One-Sentence Stories From People Who Have Built Better Habits
January 4, 2022