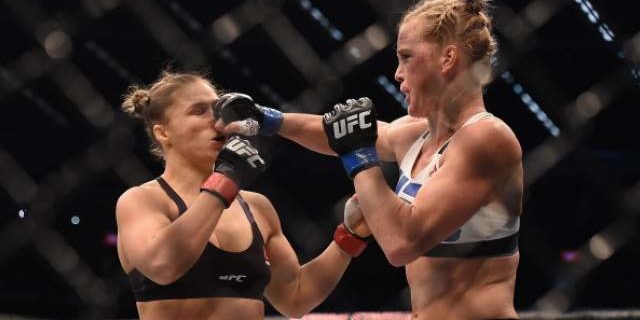 It is no secret that I am a fan of combat sports, to me there is no purer expression of a contest than two people with nowhere to go. There is no other sport that comes close irrespective of what fans of other codes think. In every other sport I have played it is possible to drift out of the contest for awhile, come back and not suffer any real consequences. This is particularly true of team sports. I am aware of the awful consequences that can befall competitors of such sports, one need only to look at the shuffling wrecks many boxers have become to understand the repercussions of choosing a profession that involves being hit in the head very hard. But the competitors are there by their own hand – for whatever reason they have chosen this life and all that it brings.

The recent staging of UFC193 in Melbourne attracted the usual mix of interest, outrage and over the top hyperbole because the headline fight was between two women. I have no problem with two women being the marque event of the night in a combat sport. To me it shows that equality has come a long way. However, my interest in this event moves beyond the simple physical clash to the strategic; to the role of those around you and the impact they have on your success or lack of it. Rhonda Rousey who came into the fight undefeated and a red hot favourite among those who didnt know any better was to all observers living the dream. She had multiple movie deals, endorsements and a was a feature of the celebrity circuit. One cynic suggested post fight that she was living the life of Rocky Balboa in Rocky 111

The fight, unlike the majority of such encounters actually lived up to the hype and ended with Rousey being knocked out in the second round. One minute into the fight this outcome was inevitable, the challenger Holms was in the language of the fight game bombing the shit out of Rousey at will. As she was being hammered all Rouseys corner could do was offer meaningless statements and platitudes. A couch who does little more than yell discipline and call you champ  is of little value. For those who dont understand the fight game, your corner is of immense value to you because they can see an overall picture – they are the master strategists particularly when things are going wrong. When your fitness is waning and someone is trying to take your head off your decision making collapses. Your corner is your combat information centre – they see what is happening and they alter tactics for you.  At the end of the first round Rouseys corner was telling her what a great first round she had and the fight was her’s.Clearly they were watching a different fight to everyone else. Less than a minute into the second round Rousey is knocked out.

What has brought me to this point is I was party to a recent email exchange with someone who had spent a little time with someone I know who is immensely successful in their chosen field. They had come to this person seeking honest mentoring and advice. Their chosen mentor had been frank and honest about the mistakes this person had made and how they could be fixed. Upon receiving this critique our intrepid acolyte promptly threw all his toys out of the pram and buggered off to sulk. What this person wanted was not mentoring but rather someone to tell him that he was a genius of remarkable standing and that every decision he had ever made was insightful and brilliant. Clearly, he had no idea what the role of a mentor was and my guess is that his knockout is not far away.

The principal defining characteristic of a mentor is honesty, without honesty there is no chance for improvement. And there are circumstances that require brutal honesty. The job of a mentor is not to tell you how brilliant you are. Despite what many would have us believe life is not underage athletics where everyone gets a ribbon for turning up. Life doesn’t care if you turn up or not, it will continue to go on whether you are an active participant or not.

Categories: Get Your Shit Together, Trading PsychologyBy Chris TateDecember 17, 20151 Comment