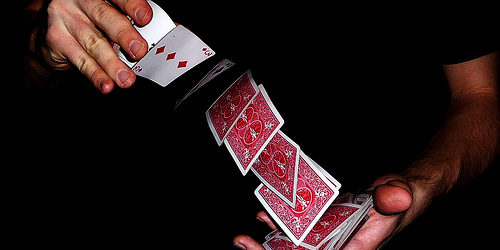 The guy had played us every step of the way. First, there was his “poor” performance at guessing—hey, we concluded, this guy puts on his pants one leg at a time. Then he complimented my son with “Hmm, you’re hard to read.” Next, The Magician gave a plausible explanation for my son’s success: “The experience with rock/paper/scissors, of course.” Finally, as my son’s run continued, The Magician indicated it was now a given that my son was virtuosic at this game: The point now was to analyze how he was doing it. Hook, line and sinker.

Something was painfully obvious. If my son had had a string of failures, with the hand containing no dime, we would have instantly used Critical Thinking 101, saying to the magician: “Hey, open your other hand, let’s make sure both hands aren’t empty.”

But faced with this string of successes, it never occurred to us to say. “Let’s make sure you don’t also have a dime in that other hand.” Instead, I had been thinking: “Wow, my son turns out to be the Chosen One of dime-guessing; my wife and I now have the heavy responsibility of ensuring that he only uses his gift for good; he’ll usher in world peace with his ability; he’ll…”

It’s what psychologists call “confirmation bias”: remembering information that supports your opinion better than information doing the opposite; testing things in a way that can only support, rather than negate, your hypothesis; and—the variant we fell for—being less skeptical about outcomes we like than we would about less-pleasing results.