Grouses Of The Holy 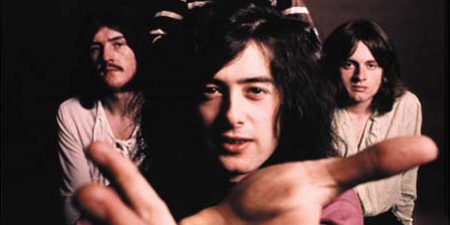 Yet this is not the case. Finding Led Zeppelin on the radio today is no more difficult than it was in 1973. If you stroll around the campus of any state college, the likelihood of finding kids wearing Zeppelin T-shirts mirrors the likelihood of finding kids trying to buy weed. This summer, British fashion designer Paul Smith announced the creation of six Zeppelin-themed scarves, independent of the fact that the members of Zeppelin didn’t wear scarves with any inordinate regularity. It’s beginning to appear that there will simply never be a time when this band isn’t famous, even if the genre of rock becomes as marginalized as jazz. Most of that cultural tenacity can be traced to the hydroelectric majesty—and the judicious, acoustic fragility—of the music itself. And most of the credit for that can be directly traced to Jimmy Page.

Page is either the second- or the third-best rock guitarist of all time, depending on how seriously you take Eric Clapton. After a mini-career as a ’60s session musician (he’s an uncredited guitarist on everything from the Who’s “I Can’t Explain” to Donovan’s “Sunshine Superman”), Page invested twenty-five months with the Yardbirds before handpicking the musicians who would become Led Zeppelin. For the next twelve years, he operated as a perpetual riff machine, re-inventing his instrument and recontextualizing the blues; his influence is so vast that many guitarists who copy his style don’t even recognize who they’re unconsciously copying. Equally unrivaled is Page’s skill as a producer, although this is complicated by his curious homogeneity—he produces only his own work. He also operates at his own capricious pace: Once renowned for his coke-fueled, superhuman productivity (he recorded all of the 1976 album Presence in a mere eighteen days), he’s released just five proper studio albums since 1980 (two with The Firm, one with ex-Zep vocalist Robert Plant, another with Plant soundalike David Coverdale, and the 1988 solo effort Outrider). All five would qualify as intriguing disappointments.