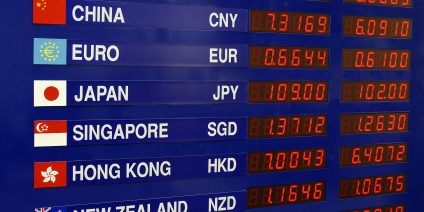 One of the issues currently bedevilling FX markets is the combination of low volatility and steady interest rates – these in concert add up to a profoundly dull market where the majority of major pairs are going sideways. Interestingly, it is also have an affect on turnover as can be seen in the chart below.

This data includes the average amount traded daily on Thomson Reuters main FX Spot trading services – Thomson Reuters Dealing, Matching and Reuters Trading for FX. As such it tallies with surveys from the major central banks which have noted a decline in turnover worldwide. interestingly, according to this data the largest drop has occurred in north American, although the importance of this is debatable since the US is not the centrepiece of FX trading.