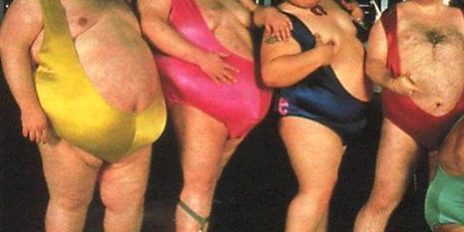 I am very fortunate in where I live because I am surrounded by trees and parks and it is only a two minute ride to bike paths that will take me into town or out to the burbs (why the hell I would want to go there I have no idea) Being near a bike path means that we get a lot of weekend warriors stopping at our local milk bar/cafe which is beautifully situated opposite one of the parks. In winter you can grab a sausage sizzle and go watch the local footy and in summer plonk your bum down with a Dixie Cup and watch the cricket. As one might expect such a place is a magnet for blokes who do not look in the mirror before going out on their bikes. If they did they wouldn’t wear lycra because to steal Clive James’s expression they all look like condoms stuffed full of walnuts. Lycra on men of a certain age should be banned under the Geneva Convention.

Our rotund and somewhat shrink wrapped hero’s park their $5,000 bikes and proceed to eat everything in sight. This phenomena of do a little bit of exercise and then pig out is known as hedonic compensation. It is a well known problem within the field of exercise science and nutrition. It arises out of the the twin problems of people grossly overestimating how many calories a given activity burns coupled with not understanding how calorie dense food is. It is why cafe’s around gyms tend to do quite well, the zumba wobbleathon finishes and all the participants file next door a for muffin the size of Ayers Rock.

However, the phenomena of hedonic compensation is not restricted to exercise, it occurs with traders as well.  I am a fan of people rewarding themselves after either a successful period of trading or even after a spectacularly successful trade. However, my notion of reward and other peoples does seem to differ quite markedly. My view is to wander down the local milk bar buy a Kit Kat and sit in the sun for an hour. Others seem to have the view that you spend most of what you have just made. This desire to spend most of what you make is an interesting form of self sabotage and it does seem to afflict some traders. The notion of self sabotage is when behaviours in the short term interfere with long term goals. The intriguing thing about self sabotage is that it is not a behaviour that many are aware or if they are it is only on the periphery of their consciousness. Subtle hedonistic behaviours are not seen as harmful because they are rationalised as I am merely rewarding myself for a job well done.

From my naive perspective  the interesting thing about this sort of behaviour is that it is quite different from other forms of self sabotage such as negative self talk and the inevitable doubting of ones ability that springs from this. It is different because it springs from an unseen voice that we often dont know exists. Undoubtedly many of those who frequent my local cafe are not setting themselves up to be a better version of themselves, they are quite content to be blobs on wheels. But my guess is some are trying to better themselves in therms of their health and fitness, and their little binges do cause them momentary pains of guilt. The same is true of traders who upon refection will wonder why they spent a good portion of their trading win on another useless thing.

Categories: Get Your Shit Together, Trading PsychologyBy Chris TateSeptember 8, 20156 Comments