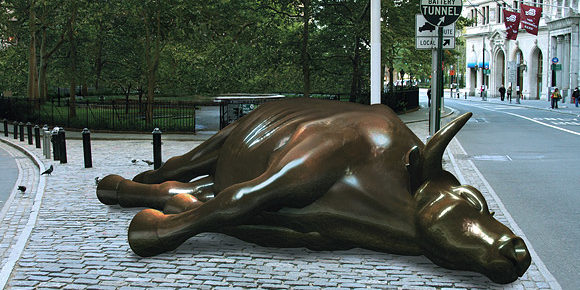 It has been a little while since I took a detailed look at the Dow, the fun and games of the past few days have motivated me put down some observations. However, a general disclaimer before I begin. I am short the US markets at present.Note the use of the word at present just because I am currently short does not mean I am a bear, it simply means that might system has switched direction and is now facing south. Next week it may change direction again.

The US market has enjoyed a tremendous rally since the GFC with the Dow climbing approximately 130%. conversely we have lingered with a gain of about half that. The trajectory of the Dow has been characterised by this broad sweeping channel.

As I write this the channel is still in place and it will take some severe price correction to challenge the lower part of the channel. However, any downward movement within the channel is more than enough to spook investors. On the daily chart price displays two patterns. A broad sideways channel with a range of around 800 points and a downtrend that had its point of origin when the market failed to follow though and complete a new high. It was this failure along with the sharp down days and lack of follow through recovery that prompted me to go short. The question is whether such behaviour would cause anyone to question the viability of continued long term investing in US equities. I dont think there is no definitive answer to this since everyones rationale for longer term exposure to a market is different. The point i think is important to make is that this question cannot be answered by looking at a narrow index such as the Dow – looking at the index is fine if you are trading the index. A broader perspective requires a broader view of market health.

The chart below is of the Russell 3000 and it shows the cumulative new 52 weeks highs and lows. the interpretation of such a chart is easy – up good – down not so good. A chart that is sloping up indicates that within the broad market a relatively larger number of stocks are making new 52 week highs versus 52 week lows.

Strong markets are characterised by strong internal dynamics. As a final point I thought I would return to the Dow and show the current trajectory of historical volatility. Unfortunately, when people see an increase in volatility they instantly assume that the market is going down. This is not so – all you are seeing is an increase in the speed and dispersion of price and from this it appears that the extended period of low volatility that we have been experiencing may be over in the short term. Over weekly time frames volatility remains flat.

So – what do I see? I see a market with increasing short term volatility and an short term trend that is down. This means that at present I am short. However, I have absolutely no idea what tomorrow, next week or next month brings.