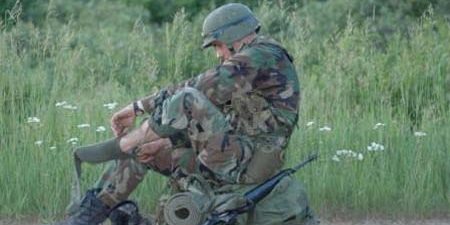 In late 1950 the Korean War appeared to be heading to what seemed to be an inevitable UN victory. The North Korean army had been shattered and UN forces had moved swiftly through North Korea and were sitting just south of the Yalu River, which marked the border with neighbouring China. In a spectacular failure of intelligence (largely a function of General Douglas MacArthur’s towering ego) the UN armies had completely missed signals from the Chinese that were going to enter the war. Caught completely off balance by the massive Chinese assault the UN forces had no choice but to begin to fall back and prepare for evacuation. Part of  this fighting retreat involved elements of the US Eighth Army, the 1st Marine Division and elements of the British Royal Marine Commando’s and was centred around the Chosin Reservoir in North Korea.

Outnumbered by almost two to one the UN Forces were able to withstand the Chinese onslaught and breakout of the reservoir and head to the evacuation point. What should have been a complete disaster for the UN armies turned into fighting retreat that shattered the pursuing Chinese forces so badly that some divisions never returned to the battlefield.

In the after action analysis attention turned to the performance relative performance of both the US Eight Army units and the 1st Marine Division. The Battle of Chosin Reservoir is legend in the Marine Corp; survivors of the battle refer to themselves as the Chosin Few. There was apparently a disparity between the performance of the US Marines and the US Army and those who analyse this sort of thing wanted to know why. The answers they came up with were not all that surprising. The success of the Marines was attributed to a few simple things such as basic field craft – selecting the higher ground, forming an effective perimeter and remarkably changing your socks. Marine Corp officers instituted rigorous procedure for their men to change their socks regularly. The conditions around Chosin were appalling and a great deal of combat effectiveness can be attributed to simply avoiding frostbite. The simple task of wearing clean dry socks allowed the Marines to be effective in the brutal Korean winter.

We all look for complex solutions to problems we consider complex and overwhelming but more often than not it is the simple yet elegant solutions that solve our problems. For example whilst I was away at Wealth Retreat there was quite rightly a lot of focus on psychology and why people seemed to be stuck at a certain point. During one of the sessions I pointed out that there is a difference between the words I cant and I wont. For example when people talk about making a change such as losing weight, getting fit of fixing their relationship they often use the expression I cant. In saying I cant they move the burden of responsibility to an agent outside to themselves. It is more appropriate for them to say I wont. This simple change in language changes the level of personal responsibility for the problem. The focus is brought back to the individual – it is the equivalent of changing your socks. It is a simple change that has profound effects upon your psychology because all of a sudden the onus for solving the problem is yours.

The same is true in trading. Whilst I was away the local market took a bit of a pasting losing about 4%. The wonderful thing about being away is that you are even more insulated against incidental noise that so often infiltrates a trader’s psyche. All you really see are the closing figures – news is profoundly easy to avoid since you are largely out of touch with everything. However, news is not the real issue, the real issue is a desire to be overcome by complexity. Consider the chart below of the All Ordinaries Index.

Much can be made of reasons as to why the market has performed poorly this year and it is the job of economists to offer post hoc rationalizations for why this might be so. But all you need to know is that since February the market had tried on numerous occasions to move beyond the 5950 mark and failed. The only piece of information you need is a straight line telling you this. The simple question then becomes would you buy a market that had failed to move to a new relative high on numerous occasions.

This simple question is the equivalent of changing your socks.