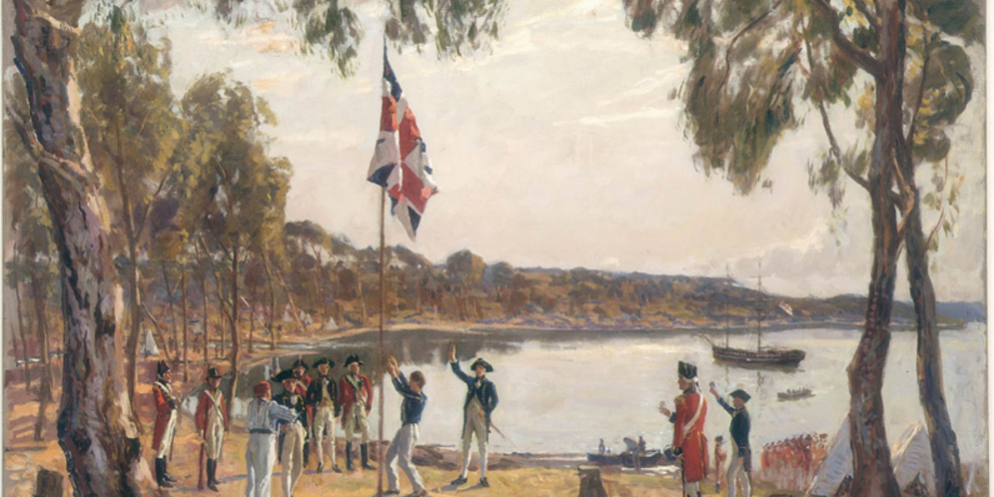 When I was a teenager I shifted schools. I moved from an inner city school that taught a diverse range of history’s such as Japanese, Chinese and a range of European focused history’s to a smaller regional school that for some reason taught Australian history. Which I found as dull as dishwater, after all not much can happen in 200 years. I can give you my potted version of Australian history in a few points.

1. The Poms and the Frogs turn up. The Frogs have a quick look around inner Sydney and say in French of course – lets bugger off back to Tahiti where it is warm and there are palm tree’s.

2. The Poms stay and lob a metric shit tonne of convicts on the place because they had run out of space at home for people who had committed heinous crimes like trying to feed themselves. Intriguingly, a bunch of in bred ponces in perfumed wigs had not worked out that if you treated the bulk of your population as filth then you might run into one or two social problems.

3. We begin 200 hundred years of screwing up relationships with the people who were here first. Again, see reference to perfumed ponces for the quality of decisions you could have expected on this matter. A quality of decision that seems to persist to this day.

4. We work out that sheep breed like Catholic rabbits in the local climate and set in train the industrial policy of shipping things to foreigners and buying them back  in a slightly modified form at exorbitant prices.

5. Rum Rebellion – a bunch of soldiers get pissed and apparently this is a defining moment. If so then there have been an infinite number of defining moments in our history.

6. We discover gold and briefly towns such as Bendigo are amongst the richest in the world. This doesn’t last long because all the wealth disappears, again setting in train an intergenerational policy of shifting wealth off shore. Good to see the tradition continues.

7. A bunch of miners get pissed and punch on with the local cops- apparently this is one again a defining moment.

8. Ned Kelly – an idiot wears a bucket on his head and fatally shoots three policemen. For some this is a matter of national pride to be celebrated along with tattooing the southern cross on your forehead.

9. Federation – why have separate governments when you can add another layer on top and then add local councils as well. Happy days for everyone.

10. Gallipoli – we turn up on someone else’s door step and they are quite rightly annoyed and belt the shit out of us. The entire thing is cock up from start to finish and confirms in the national psyche the need to celebrate failure. We celebrate the event by shipping thousands of pissed, poorly behaved Australians back to Gallipoli once a year thereby pissing the Turks off once again.

Dont think I missed anything.

However, in amongst all of this detritus I did learn something. It is better to sell shovels to a miner than to be a miner. With all the collective breathlessness currently doing the rounds regarding ETF’s it is necessary to take a deep breath and look at where and how you generate out performance in the market. There are a few points about ETF’s, particularly index ETF’s such as STW that are manifestly true and in no particular order they are.

1. They allow a broad market view that can enable investors to take advantage of long term moves in equities.

2. They offer a cheap solution for the management of compulsory savings schemes such as superannuation. In fact if you simply used index based tools the performance of all superfunds would probably lift dramatically.

3. They do allow simple means of exposure to other markets.

4. They are not magic. They can help average investors but they cannot save them from themselves.

From my perspective there are two key points. Firstly, if you are going to trade index ETF’s for outperformance then you need to select the correct one. Secondly, the natural question that arises is, are they the best vehicle for taking advantage of long term trends in equities markets?

The reason for this differential is simple. When markets are recovering from sustained falls money moves first into what are perceived as quality or blue chip issues and this has been the situation locally. Fund managers have been loathe to buy outside of this criteria to any great degree. This relative performance can be seen in the performance of the S&P/ASX 200 versus the S&P/ASX 20. One is years off its all time high whereas the other has nudged at its previous record highs. Comparing to index ETF;s does not off course answer the question as to where to achieve outperformance in a rising market. To do that it is necessary to come back to my earlier statement about it is better to sell a miner a shovel than to be a miner. In the chart below I have compared the performance of STW to that of ASX – the listed entity that controls our local stock exchange.

As can be seen, being involved in the business that controls an exchange is more profitable than being involved in one of the metrics that measures the performance of entities within that exchange. So if I were looking for a long term instrument that moves strongly when markets are trending I would opt for the business with the most to gain both in reality and perception from that bull market.