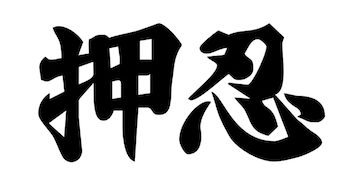 I was cleaning out some old stuff of mine after finally getting the painters out of my house and I came across an old battered and weathered  t-shirt of  mine that had the following kanji characters written on it.

For those whose Japanese is a little rusty it breaks down to the expression Osu. Osu is a contraction of the characters Oshi meaning push and Shinobu meaning to persevere or endure. If you were to string the words into a form that is comfortable to us English speakers it would literally means to endure or persevere under pressure. The contraction of Osu is often heard in dojos as an acknowledgement of an instruction or command. It is used instead of yes or no since it conveys not only a the acknowledgement but also something deeper You are telling someone that you will persevere.

For me it is one of those phrases you hear in another language that whilst having no real direct translation into English conveys an enormous amount in terms of shared experience. If I said Osu to someone with the same background as mine we would instantly share a serious memories which whilst distinct and idiosyncratic are nonetheless shared.

Coincidentally, we have reached one of the first landmarks in the Mentor Program where perseverance is required and where people begin to drop off because they realise there is work involved and that they will not be given a magic system that will turn them into trading gods. Interestingly, this is most peoples approch to life – their interest and motivation lasts a few weeks and then once they realise that a commitment is needed they lose interest.

In my mind success in anything is about simply grinding it out or as the Japanese would say Ishi no ue ni mo sannen or three years on a rock. The problem is most people want a simple 12 week on a rock program at the end of which they get a certificate.