My Adventure With Telstra 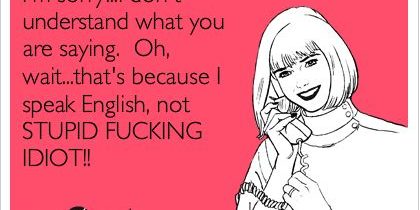 I like the rest of Australia share a hate-hate relationship with TLS. They are a bumbling, incompetent bunch of dicks that we are stuck with courtesy of successive bumbling incompetent governments who have had their heads firmly rooted up their arses when it comes to communications policy. Where else in the world would you have had successive Ministers for Communication who have claimed to either have never sent an email or believed they invented the internet.

However, I digress from the purpose of my rant. I have received two successive communications from TLS telling me that I am about to receive a new modem which I didn’t ask for. Fantastic I think – what could possibly go wrong. The letter I received told me that I could change the address to which the modem could be sent and since I am never home to collect such things I decided to tempt fate and ring TLS and tell them to send it to a different address. How stupid am I ?

So I ring the number on the letter and guess what…..it doesn’t connect. At this point I should have realised that the universe was telling me something and I should hang and go do something useful with the next hour, but no I press on like Odysseus in the Odyssey and we all know how well that went…So I ring again and eventually get through to my very polite helper who was no doubt enjoying better weather somewhere else in the world than I was in Melbourne. I explain to him that I wish to redirect the modem I am receiving for free to a different address and after exchanging a few details he tells me I am not receiving a new modem. I say yes I am and he says no I am not and I say yes I am and he says no I am not. This goes on for a little while till I read him the actual letter sitting on my desk – its odd how the instant defence of all Australian companies I have dealt with is to assume that the client is a liar. Probably explains a lot about how things work in Australia, or in the case of TLS dont work.