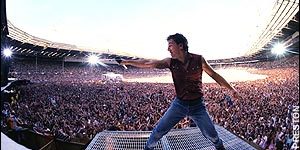 This is from the wonderful Lefsetz Letter that everyone should be subscribed to. Pay particular attention to the paragraph I have highlighted

Are not bitching about what everybody else is. Money is not their issue. Everybody wants to be in business with them.

The transition in the business is evidenced by the fact that those who consistently sell out stadiums are younger generation acts, baby boomers cannot. Bruce Springsteen can do stadiums overseas, but not in the U.S. U2 may have been off the road long enough to try stadiums again, but without a hit new record, they probably shouldn’t.

So the number one worldwide stadium act is One Direction, which breaks merch records wherever it goes, which has more sponsorship/endorsement deals than you can count. If you think the music business is in trouble, you’re unfamiliar with their income. It only pales in comparison to those in finance/investment.

Then comes Taylor Swift. The opening act doesn’t matter. She made it on her music. If you hate Taylor Swift, either you were involved with her or she wrote a song about your or both, but Ms. Swift is everything that’s right about the music business, she told the story of her life in catchy songs, and you wonder why everybody is lining up to give her money?

And then there’s Luke Bryan, who fills the structures with support acts, as does Kenny Chesney, still Luke’s headliner status cannot be denied. He’s had years of hits and makes music in a style trendsetters and tastemakers say is unfashionable, i.e. rock and roll, even though they call it country.

More acts, however thin the layer, are selling out stadiums than in years. This is a good thing.

Radio hits got them here. That’s the power of FM. They might have gotten their start online, but radio is selling 15,000-20,000 tickets a night. More than ever, these acts are pop, because that’s what radio is. Will Katy Perry and Rihanna still sell ducats when they run out of hits? History says no, but we’re rewriting history as we sit here.

Ticket prices are astronomical, so even though recorded music revenues are down, today’s arena acts make more money than yesterday’s. In the heyday of the early seventies, tickets to the arena were less than ten dollars. Today?

And the classic example is the Eagles, who go clean everywhere at prices so high that there’s enough money to fly private and everybody takes home millions. Sure, it was easier to stay home and count record revenue than plying the boards, still, there’s a lot of money out there for classic acts that can still sell out arenas.

And then there are the neo-classics, like Metallica, which still make new albums that some people care about and may not do stadiums in the U.S., but do so outside of it. Illustrating, once again, the myopia of those who don’t realize there’s more money to be made outside the U.S. than in it.

The quintessential example is Outkast. Stay away long enough and festival promoters will pay you uber bucks to reunite and headline their weekend. Because festivals need a draw, and novelty sells. Payment is high, work is relatively easy, but when the festival season is over you’d have better saved your money, because your earning days, if not through, will probably not reach this stratospheric level again.

They’ve got to fill out the bill. If you’re a real name, who can sell tickets elsewhere, welcome to a decent payday. If you’ve done something and are new you’ll get an appearance. But do not believe playing the undercard means you will work next year, or get booked on festivals the following year. The festival is not about you. And only a few attendees care about you. And almost no act breaks out of, never mind is revived out of, festivals. Want to make money at a festival? Be the promoter!

Tend to be repackaged classic rockers. There’s a lot of money in it. Hundreds of thousands of dollars a night if you can sell tickets. The owners have to fill the seats, to satiate sponsors. They need draws. So Styx can work every year, as can Def Leppard, but most of these acts do have to work every year, income is good, but not enough to retire. You may be able to take one season off.

Then there are the new acts playing sheds. Occasionally there’s a breakout headliner, oftentimes it’s packages. These acts are on the way up as opposed to experiencing a victory lap. They are not rolling in dough. They are on the cusp. They’re not bitching about Spotify payments, but they’re looking at every avenue to make coin. They’re hungry for sponsorships, they want to get their music out there. They’ve broken through, their desire it to stay there.

Younger acts invest more in the shows. Older acts, and those skewing older demographically, focus more on the music, that which resonates with their audience.

Theatre acts usually the hot ones. Those with the sound hipsters are talking about. The ones promoted by the public radio station and SiriusXM. They wish it were easier. They wish they could make money off of album sales. They wish there was a meaningful radio outlet that could blow them up. But either they need another hit single, yes, nascent Top Forty acts play theatres, or they’re caught in limbo, they can’t break through the ceiling. And there’s a good chance their audience won’t maintain.

So the good news is someone cares. The bad news is not enough. And going one step up is so hard.

There are two kinds of clubs. Ones holding over a thousand people, and there are many, like the Wiltern, are akin to theatres, the acts that play them are theatre acts.

And then there are the true clubs. Which hold a few hundred people at most.

Once upon a time, record companies kept clubs in business, by buying tables and drinks. They don’t do this anymore. Clubs have to make it on their own. So they can’t afford name talent and they need acts that can sell tickets. So frequently clubs feature acts many have not heard of and don’t draw. And it’s easier to break through online than it is to go on a club tour, unless you’re a great live act or a developing metal or punk band. You can get your business started, but it’s up to you to make it bigger.

You were someone once. Or you play adult-oriented folk. You complain that it ain’t the way it used to be. On the other hand, it can be a very good middle class living, but it’s the last stop, the dead end. You can make new music and sell it to those who attend, but no one else cares. It’s frustrating, but radio doesn’t want old people and old people, other than the ones who come to your shows, don’t want new music.

You must have millions of plays to be a sensation. Hopefully, double digit millions. If you hit triple digit millions, go on your instant victory lap, like PSY or Carly Rae Jepsen, that’s all you may ever get.

So if you’ve got millions of plays, pat yourself on the back, you’ve accomplished something. But not much.

How can that be?

There’s too much info, everybody’s a grazer, what have you done for me lately… You’re not even a one hit wonder, you’re making almost no money, you think you’re entitled to more but you’re not. You rail that no one’s buying your album. And you complain that streaming pays a pittance. But the truth is you’re just not big enough.

Congratulations, someone believes in you! Probably because you racked up a few million YouTube plays. Someone’s got money to invest, hopefully they’ll push you on the radio and get you started in theatres. But maybe not. The regime might change, tastes might change, maybe your record isn’t that good. And if the label cares, it’s not going to release that LP until they believe it’s got a hit. It’s their money, they don’t care about you, but them. Save every penny you can, it’s all you may ever see.

You can tell your friends and family you have a deal but there will be almost no investment in you and you’ll still be doing all the work. Sure, some indie albums break through, but those are the ones with labels attached to the major label machine, who decide to make you a priority. You think you’re in the music business, you think you deserve more, and you’re frustrated where you end up. The indie acts complain louder than anyone. They’re passionate about what they do so they believe everybody else should be too. They just can’t understand why they can’t get paid. They work so hard, they’re getting screwed by Spotify, they yearn for the pre-Internet era, not realizing in those years they wouldn’t be allowed to play at all, recording would be too expensive and they wouldn’t be able to get distribution into physical retail. Just because you’re on iTunes that does not make you an act worthy of attention.

Is in their basement, concocting tracks, devouring all the information on the web. While the top liners are too busy making money to dive into the minutiae, the hobbyist knows everything about Pandora and Spotify and voices their opinion constantly. The hobbyist wants to be in the game. But most don’t take action. They don’t want to give up their day job, they don’t believe in themselves enough. They’d rather complain about the game than play it. Beware of the words of the hobbyist.

The mirror star. The “Voice” expert. The couch potato. Someone who consumes media and plots their way to the top believing it’s all about short cuts and no hard work. They believe the business is a game alternately in their favor or stacked against them. They believe the judges really have power. They will do anything for stardom. Which bothers those further up the food chain, who believe they’re paying real dues. In reality, they’re passionate fans, who usually need a few more years to give up their dream.