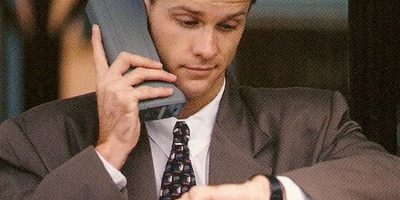 So I am sitting with my feet on the desk contemplating visiting the girl who buys clothes for me at David Jones at lunchtime, my visits down to DJ’s were always full of little surprises. Before I could drag my arse out of my chair my phone rings. This time it is actually one of my clients and not the peanut who wanted to list his house on the stock exchange, who believe it or not rang back a few days later and wanted to list his taxi. I had to have a stern word with the receptionist over that one….FFS.

Anyway this client of mine had a bank bill facility rolling over and wanted me to stop at treasury on the way through to confirming my status as a wanker by having someone who selected clothes for me. I said not a problem since it would take all of two minutes to tell them to roll the facility over. So I wander in and tell them the name of the facility, tell them it is for $15 million and without asking further questions they ask what name would I like the cheque in…WTF?. I do get them to roll the facility and apparently I could have had in any form of bearer securities that I wanted. No wonder these peanuts were surprised when Pyramid Building Society collapsed – I always thought treasury dealers were a bit light on for intellectual horsepower since they actually thought the bond pricing equation was hard. They had all just finished reading Liars Poker by Micheal Lewis and thought they were masters of the universe. But at least they could use a calculator, I had a broker on the desk opposite me ask to use my calculator once so I tossed it over to him and after a few minutes staring at and pushing buttons at random he threw it back complaining I had been ripped off because it didn’t have an equals button. He had never seen a HP 11C before but then again I wouldn’t expect someone who had been a shoe salesman to have seen one.

Recovering from my shock at the Fort Knox like security of being offered $15 mil of someone else’s money I troop down to DJ’s to check things out and then wander back to the dealing room where one of operators has wandered back from lunch completely and utterly shitmixed from a long lunch. He then proceeds to attempt to enter a collection of non-existent orders into SEATS, which is a general pain in the arse for all concerned. You know that old adage of never buying a car that was built on a Saturday afternoon, well the same thing used to apply to brokers giving advice on a Friday afternoon.

When I was in broking errors by the operators were common place, entering an order incorrectly could result in huge lines of stock being bought or sold incorrectly. Fortunately the ASX had a simple policy of dealing with this problem, each order was cancelled and the market returned to status quo. It was a gentlemen’s agreement and it worked very well – the rate of errors decreased as we gradually moved to screen based trading but they still occurred. Every firm at one time or another cocked it up. Once in the late 1980s one of our operator made an error on a fairly large order. Instead of being keyed in for $3.57 was keyed in as $7.35 and it cleared out most of the buyers on the screen. All parties involved instantly cancelled the orders with the exception of one prominent high profile broker who refused to do so. Intriguingly his operator made an error a week later and everyone refused to cancel the trades.

There is nothing quite like having the karma bus pull up and have everyone get out and kick you in the balls.

Although I have to admit a good operator was worth their weight in gold and I learnt very early on that it was worth keeping onside of the option floor operators even if it meant kicking a little gift their way every so often.