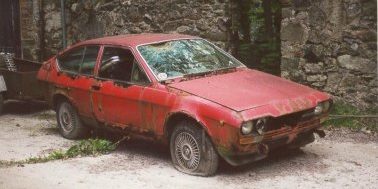 When I was much much younger and beginning to fully express my childish liking for cars I bought a Series 2 RX7, which I then had worked on. At the same time a friend of mine bought an Alfa GTV and he used to make disarranging remarks about my rice burner. However, within a month he had a chronic back problem from the utterly demented driving position which had been designed for a special breed of human known as the Italian ape man. The features of this human were that spine, hips and legs were all offset by about 15 degrees to cope for the fact that the seat didnt line up with the peddles and the steering wheel didnt line up with the seat. To drive it you had to form an S shape.

After two months one of the windows had fallen in and the driver side door no longer opened on a regular basis. After thee months the RACV had sent him a rude letter that basically said your car is shit buy something else. To aid him in the cause every time we went somewhere and I saw it parked I put $10 and a business card from a local tow truck operator I knew under the wiper. ….I never claimed I wasnt a prick.