How a Single Mom Created a Plastic Food-Storage Empire 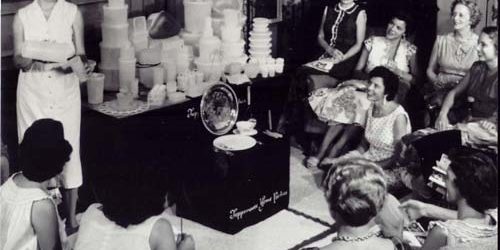 ………. For five hours that day, they prospected for mink stoles and freezer units, gold watches and diamond rings. One of them, Fay Maccalupo of Buffalo, New York, dug up a toy car. When she saw the real Ford it represented, she planted her face against the hood and began to weep, repeating, “I love everybody.” Four women fainted and had to be revived with smelling salts. It was understandable, considering that the total cash value of all the prizes buried in the Florida dirt was $75,000.

Presiding over the treasure hunt was the general sales manager of the Tupperware Home Parties division, a 40-year-old woman named Brownie Wise. For hours, she cheered on the ladies from a loudspeaker with an air of royalty. As she watched them hop on shovels and unearth the rewards of their labors, she couldn’t help but feel proud. Wise took satisfaction in seeing her hard work pay off—once again. The jubilee, which she had organized, had all the pizzazz and spirit expected of an official Tupperware event. The media agreed: Network news was there to cover it, and Life magazine ran a photo essay highlighting the excitement and glamour.