The Decline Of Pseudoscience 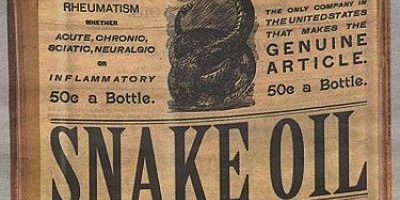 Have we reached peak green juice? The New York Times’ Brooks Barnes suggests as much in a recent story about what a haute-hippie refuge in California is bringing to an already over-saturated market:

With every mini-mall, gas station and gym in Los Angeles now boasting a juice bar, or so it seems, the truly cutting-edge folks need to raise the ante to the point of ridiculousness. Kale-avocado-dandelion-cucumber-caraway-seed-jalapeño-heirloom-pear smoothie? Snore.

When the “Style” section not only identifies a trend, but deems it passé, it’s a safe bet it has indeed run its course. But it’s not just glorified cold vegetable soup that’s lost its allure. The pseudoscience that persistsmore generally in America is losing its cultural cachet.

In recent years, health trends became status signifiers to which mainstream Americans aspired. A high-end health food store grew into a supermarket-chain juggernaut. Designer clothing is now yoga-wear. Refusing to vaccinate one’s children, or to eat gluten, became at one and the same time ways to announce that one is upscale, and ways to convey an ethical commitment to healthy living. It wasn’t about being snobbish toward families who consume “juice” drinks. It was about tsk-tsking their choices while slurping an $8 bottle of agave-sweetened, cold-pressed… fine, juice drink, but at least one that comes in a BPA-freebottle. “Healthy” living became associated with being upper class, and therefore glamorous. The pseudoscience embraced by the rich—a group who also have superior access to actual healthy living, as in proper medical care, safe places to exercise, and so forth—is now, in turn,marketed to the rest of the population.

I wouldn’t raise the victory flags just yet. There are still of lot of idiots out there…..

Category: Get Your Shit Together, History and Science, Morons I have metBy Chris TateMay 14, 2015Leave a comment

The Zombie Apocalypse Is Upon Us….Apparently
February 28, 2020