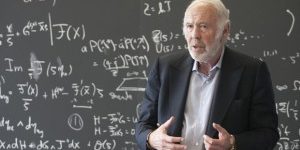 James H. Simons likes to play against type. He is a billionaire star of mathematics and private investment who often wins praise for his financial gifts to scientific research and programs to get children hooked on math.

But in his Manhattan office, high atop a Fifth Avenue building in the Flatiron district, he’s quick to tell of his career failings.

He was forgetful. He was demoted. He found out the hard way that he was terrible at programming computers. “I’d keep forgetting the notation,” Dr. Simons said. “I couldn’t write programs to save my life.”

After that, he was fired.

His message is clearly aimed at young people: If I can do it, so can you.

Down one floor from his office complex is Math for America, a foundation he set up to promote math teaching in public schools. Nearby, on Madison Square Park, is the National Museum of Mathematics, or MoMath, an educational center he helped finance. It opened in 2012 and has had a quarter million visitors.