A Day in the Life of a Food Vendor 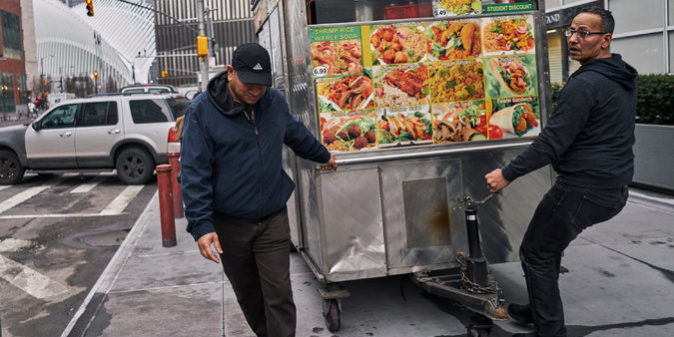 It’s 6 on a Wednesday morning, and Kabir Ahmed has snoozed his alarm one too many times. He steps softly, barefoot, around his small, second-story apartment in Jamaica, Queens, creaking through the green and pink hall.

He is late, but careful not to wake his wife and their three children, or his mother, who will be up in an hour to say prayers and cook breakfast. He puts on his baseball hat, slides his feet into rubber clogs and hurries out without coffee.

Mr. Ahmed, 46, is in the business of chicken and rice. He immigrated from Bangladesh 23 years ago, and is now one of two partners in a halal food cart that sets up on Greenwich Street close to the World Trade Center, all year long, rain or shine. He is also one of more than 10,000 people, most of them immigrants, who make a living selling food on the city’s sidewalks: pork tamales, hot dogs, rolled rice noodles, jerk chicken.

PS: I have to admit I was fascinated by these food trucks when I was in NY last year. All of them seem to be clones of one another in much the style of the one described in the article. However, we came across one not far from our hotel which was not a clone and had a queue outside the front of it no matter what time of day or night you went past it.